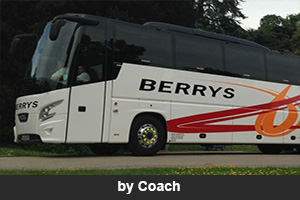 Important Notice to the Coach Companies that use the St Dunstans Car Park (BA6 9EL). As from Tuesday 31st March, there will no longer be a coach passenger set down and pick up in St Dunstan’s (Abbey) car park in Glastonbury. Mendip District Council have provided eight free coach parking bays in Northload West car park, Feversham Lane, Glastonbury BA6 9JJ. Glastonbury Town Council have re-opened the toilet facilities in that car park to provide a service to passengers.

In addition to the services listed below there are also frequent coaches from many towns & cities (and Heathrow Airport) to Bristol, where you can connect with the 376 local bus to Glastonbury.

Berry’s Coaches
Connecting Glastonbury, Street & Shepton Mallet to London with a single service. Coaches depart London at 17.45 and Glastonbury at 08.30 (Sundays & Bank holidays have different timetable). Timetables & Fares on the website. Select Superfast 3 from the options.

Megabus
Low cost inter-city travel with several services to Bristol from where you can get the 376 local bus to Glastonbury.