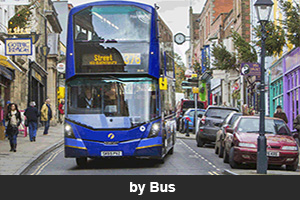 Wells is the main hub for local buses. Below we list the buses that stop in Glastonbury but if travelling from Bath (or elsewhere not listed) Wells Bus Station will be your place to head for.

You cannot book local buses in advance – you pay the driver on boarding the bus. Some (but not all) now accept contactless payment. All accept cash but be advised not to offer £20 or £50 notes as these may be refused.

First Bus have introduced mTickets via their app. Our area is West of England and that covers travel from Bristol or Bath to Glastonbury. The mTickets must be purchased in advance and activated just before boarding the bus.

667 Bus Timetables
Wincanton – Bruton – Castle Cary – Street
Only 4 buses each way per day but if timed right can get you to and from the train station at Castle Cary.